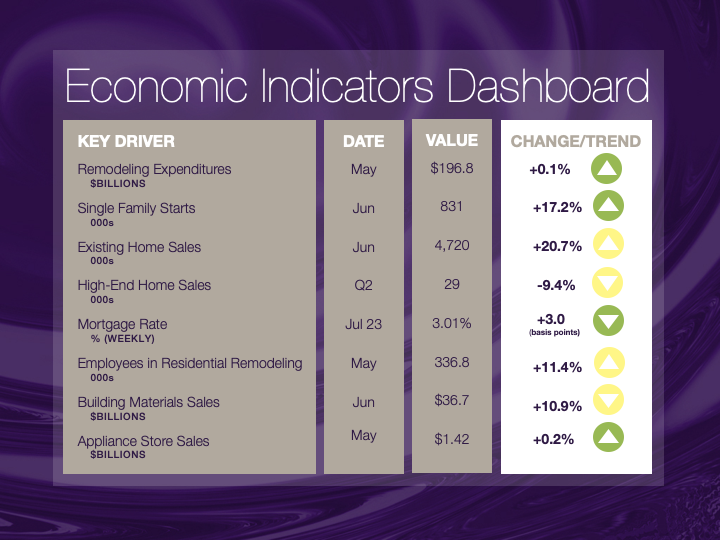 Will the Housing Surge Continue?

Most housing market indicators are currently sending strong signals that the economy may recover, barring a new government-imposed shutdown of business activity. Last week saw a jump in new housing construction, with housing starts as well as permits increasing for the month and reaching numbers that were hard to imaging only a couple of months ago.

Similarly, sales of new and existing homes each rose sharply last month. Sales of new homes bounced back by 14% in June to reach an annual rate of 776,000 homes, even barely exceeding the pace seen in January of this year. Also, prior to January, sales had not been this vigorous since mid-2007, right at the peak of the housing boom that had started in the 1990s and ended tragically in the 2007-2009 recession.

At the same time, sales of existing homes jumped by a stronger 21% in June to an annual rate of 4.72 million homes. Despite this gain, June’s pace is 11% short of last year’s volume, or more than 600,000 fewer units. Note in the chart below that sales of existing homes between mid-2018 through the end of last year ranged between 5 million and 5.5 million units, compared to the above-mentioned 4.72 million homes. 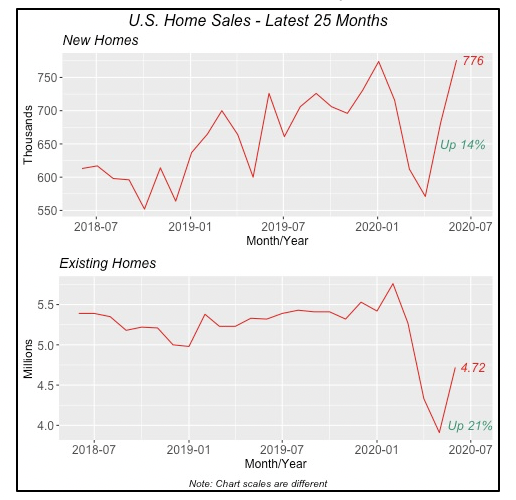 All four U.S. regions contributed to the national sales gains. In the new homes sector, the Northeast, South and West increased by an almost identical number of homes: more than 25,000 in each of them. The Midwest accounted for less than 10% of the change from prior month – 8,000 of the 94,000 total units for the U.S.

But for existing homes, the majority of the sales took place in the two largest regions, the South and West, which jointly accounted for more than three-quarters of last month’s increase (84%). 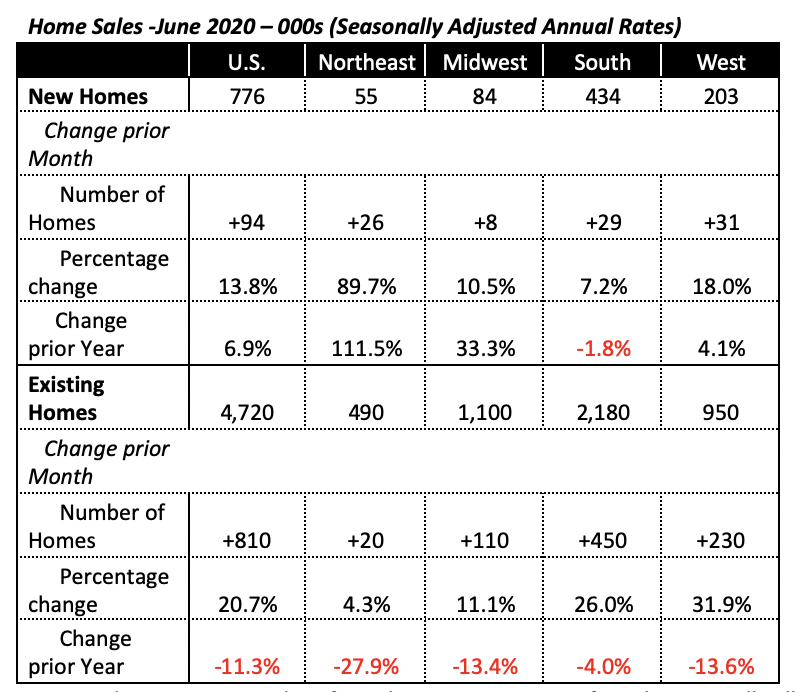 Compared to a year ago, sales of new homes were up significantly in virtually all four regions; the only exception was the South, where they were down 1.8%.

Along with robust home sales, the prices of those homes also trended higher. The average price of new homes sold in June jumped nearly 9% to $385,000, although this is just 1.5% higher what it was in June 2019. Nevertheless, the June 2020 selling price of new homes matches almost exactly the average for all of 2019, which was $384,000. 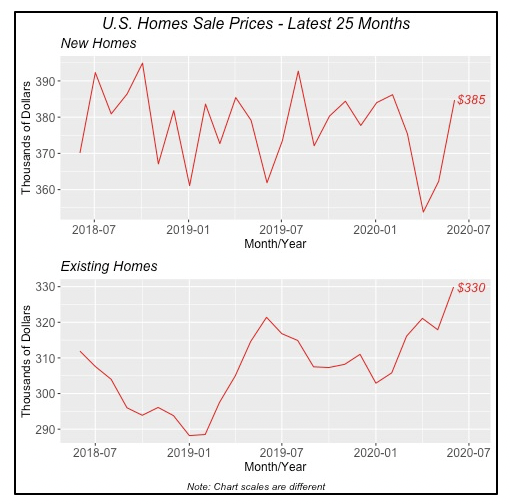 There was a shift toward lower-priced homes in the second quarter, with the largest gain among homes priced under $250,000, which increased by 0.8% to 27.7% of all homes sold. 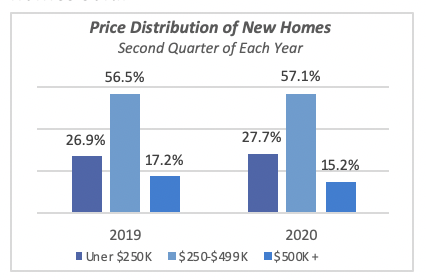 This contrasts with the general trend in new-home prices from the turn of the century. Generally, the share of lower-priced homes, that is those selling for less than $250,000, has declined more or less steadily from nearly 70% in 2002 to this year’s 27.7%. 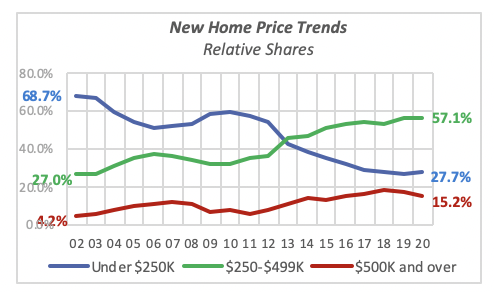 Even though home sales have increased, and perhaps more households are becoming homeowners, the great number of people who have lost their jobs over the last four months suggests that many of them may be in financial peril. In fact, information services company Corelogic revealed in April that the mortgage delinquency rate reached 6.1% in April, 2.5% higher than what it was a year before.

Mortgages that are 30 or more days past due are classified as delinquent. The government’s additional payments for unemployed people may help alleviated this situation. However, the two major holders of mortgages, Fannie Mae and Freddie Mac, stated that mortgage loans in forbearance have dropped for six consecutive weeks. Forbearance loans are those for which the financial institution allows the borrower to postpone or suspend payments for period of time, that is, the borrower is temporarily relieved of the payment burden. 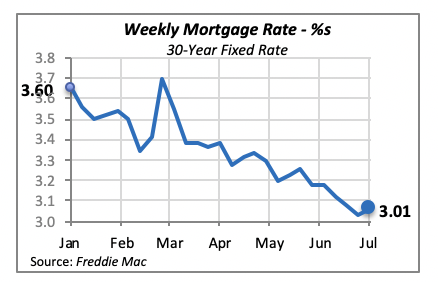 In all instances, the increases are minimal and will not hinder further gains home sales, residential construction or even remodeling. 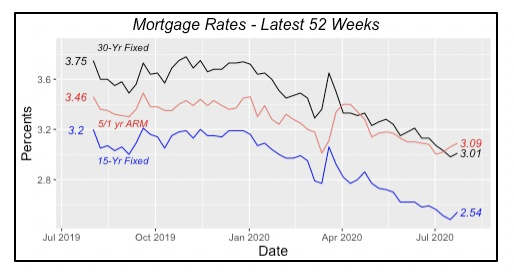 The dashboard displays the latest value of each economic indicator with a colored triangle that highlights visually the recent trend for each of the drivers. “Green” is a positive signal indicating that the latest value is improving; “Yellow,” as it’s common understood denotes caution because the variable maybe changing direction; and “Red” indicates that the variable in question is declining, both in its current value and in relation to the recent past.

Note that all the data, except for “mortgage rate” and “appliance store sales” are seasonally adjusted and are represented at annual rates.

Remodeling Expenditures. This is the amount of money spent on home improvement projects during the month in question. It covers all work done for privately-owned homes (excludes rentals, etc.). The data are in billions of dollars and are issued monthly by the U.S. Department of Commerce.

Single Family Starts.  It is the number of single family houses for which construction was started in the given month. The data are in thousands of houses and are issued monthly by the U.S. Department of Commerce.

Existing Home Sales. These data are issued monthly by the National Association of Realtors, and capture the number of existing homes that were sold in the previous month.

High-End Home Sales. This series are sales of new homes priced at $500,000 and over. The data are released quarterly by the U.S. Department of Commerce, and are not seasonally adjusted. Thus a valid comparison is made to the same quarter of prior year.

Building Materials Sales. These data, released monthly by the Department of Commerce, capture the total sales of building materials, regardless of whether consumers or contractors purchased them. However, we should caution that the data also includes sales to projects other than residential houses.

Appliance Store Sales. This driver captures the monthly sales of stores that sell mostly household appliances; the data are stated at an annual rate. We should not confuse this driver with total appliance sales, since they are sold by other types of stores such as Home Centers, for instance.

We hope that you find this dashboard useful as a general guide to the state of our industry. Please contact us if you would like to see further details.