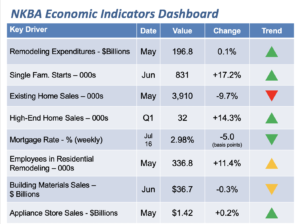 Home builders started construction of new homes in June at an annual rate that almost matches last year’s pace: 1.186 million units. This is just 4% lower than last year, and further, they were 17% above the prior month.

The chart below illustrates the strength of the new housing market in the first two months of this year. Houses were started at a pace that was 300,000 units faster than any of the prior four years, only to collapse in March when the pandemic shutdown took effect. 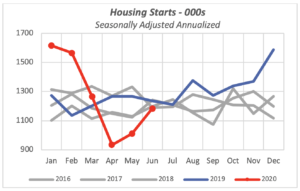 The chart also shows the relative stability of new housing construction from 2016 through 2019, and how housing starts began to improve in the last few months of last year.

The question of whether the last two months’ rebound will continue remains unanswered, naturally, but there are economic forces that suggest that new housing construction should stay on this path, barring another drastic economic shutdown. Mortgage rates remain very favorable (discussed in greater detail below) and the inventory of homes for sale remains extremely low, relative to demand. That gap is partly filled by home builders starting construction of new houses.

Currently, as of May, the inventory of existing homes for sale was 19% lower than a year ago. The greater demand for houses is showing up in higher prices. The price of an existing home in May was 2.3% higher than in May 2019.

The increases in June housing starts was brought about equally by gains in single- and multifamily housing. Both categories increased by a similar magnitude in June. 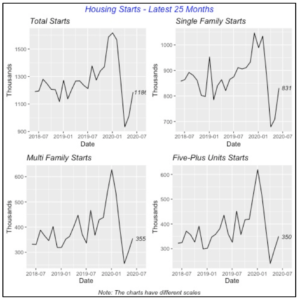 The table below provides the latest housing starts data for the U.S., nationally and it its four major regions. 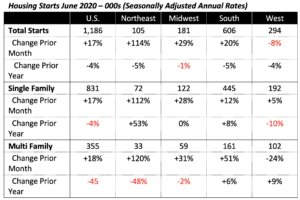 Home builders and general contractors begin construction of a new house, whether it’s a single-family home or units in a multifamily building, with a specific purpose in mind. Typically, they are either starting construction of a spec home with intent to sell it, or they are under contract to build the home for a specific homeowner. In a few instances, a homeowner may act as the contractor himself.

In the case of multifamily housing, builders or developers construct the buildings for either rental or to be sold as condominium units.

Contractors built 23,000 custom houses to the specifications of homeowners who owned the lot where the houses were built. Thus, “Contractor Built” houses accounted for 11% of first-quarter activity.

Lastly, a small number of single-family houses are built by the homeowner himself acting as the contractor. There were 9,000 homes built by owners themselves, accounting for just 4% of all the houses started in the first quarter. 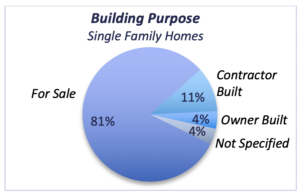 But single-family houses built “For Sale” have been steadily gaining in popularity over the last 50 years, as non-professionals aim to flip or build spec houses as an income-producing endeavor. The chart below shows that they accounted for about 65% of all single-family houses in the 1970s, increasing by nearly 20 percentage points to the current 81%.

Conversely, “Contractor Built” and “Owner Built” homes have been losing popularity during the same period. 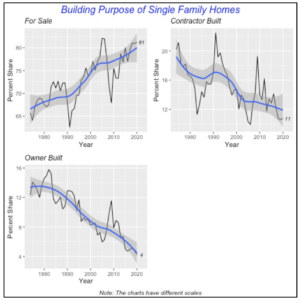 Housing units in multifamily buildings are built either for rental purposes or to be sold as condominium units. Currently the vast majority of units are built “For Rent,” accounting for 94% of the units started in the first quarter of 2020.

The left pane in the chart below displays the “For Rent” units share of multifamily housing, for the first quarter of each year back to 1974. The right pane display the share of units that are “For Sale.”

But over the last decade, the share of “For Rent” units has increased more or less steadily to reach the above-mentioned 94% in the first quarter of this year.

Conversely, the share of multifamily units built For Sale as condominiums has fallen over the last ten years to remain around six percent of the total. 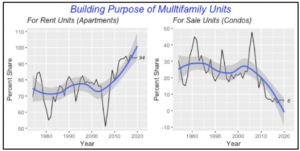 Sounding like a broken record (or whatever the equivalent digital skip-and-repeat would be), mortgage rates dropped again last week, to another all-time low of 2.98% for the 30-year, fixed rate. That’s a drop of five basis points from the previous week, and the lowest in a half-century. 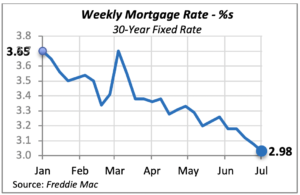 Lower rates should encourage additional housing construction, home sales as well as remodeling activity. Since the initial shock of the pandemic shutdown, housing activity has recovered. New home sales in May increased by 17%, although sales of existing homes actually fell by 10% in the month; the latter is attributable mostly to a low inventory of homes for sale.

Finally, remodeling expenditures by homeowners have remained relatively stable in May, barely rising by 0.1% to $196.8 billion. 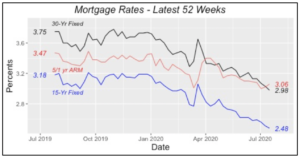