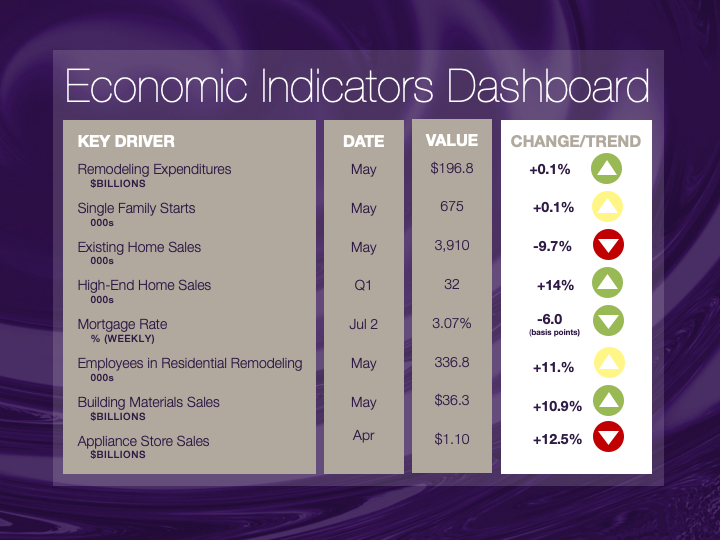 Employment: Beginning the Long Crawl Back

Allowing businesses to operate again has had the expected result of seeing the number of workers called back or hired increase for the second month in a row. In June, employment rose by 4.8 million workers, bringing total employment to 137.8 million. Even combined with the 2.7 million jobs added in May, the number is still 14.7 million positions short of the 152 million who were employed in February, right before the reaction to COVID-19 hit the economy.

The chart below illustrates the ground yet to recover to get back to February’s employment level. Today’s employment number matches that last seen six years ago, in early 2014, highlighted by the dashed red line. 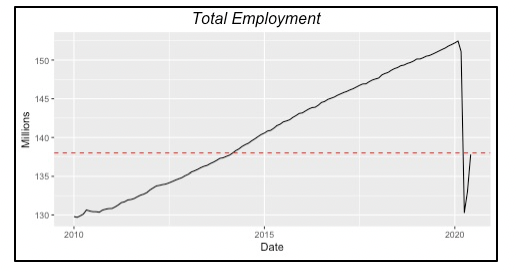 Even though most economic sectors enjoyed employment growth in both May and June, their gains are still not sufficient to overcome the losses of the preceding two months, i.e. March and April, when the shutdown was more drastic across all states.

But in two relatively small private-sector industries, employment has not improved after the phased reopenings. They are Mining, which lost another 9,800 jobs, and Utilities, which was down by 8,600 jobs. These two industries combined, however, account for less than 1% of U.S. employment.

Also, we find that at the government level, State employment fell by 25,000 workers in June, for the fourth consecutive month of job losses. But state governments, which are enforcing the business shutdowns, are now realizing that they are also shutting down their revenue streams. The shutdown has reduced retail sales over the three months ending in May to be 13% lower than the previous three-month period, i.e. December through February. This means that state revenues from retail sales taxes, a primary source of state revenue, have all shrunk by a similar magnitude.

Compared to the same month last year, Residential construction is ahead, but just by a slight 0.7%, while Non-residential is running 3.5% behind. 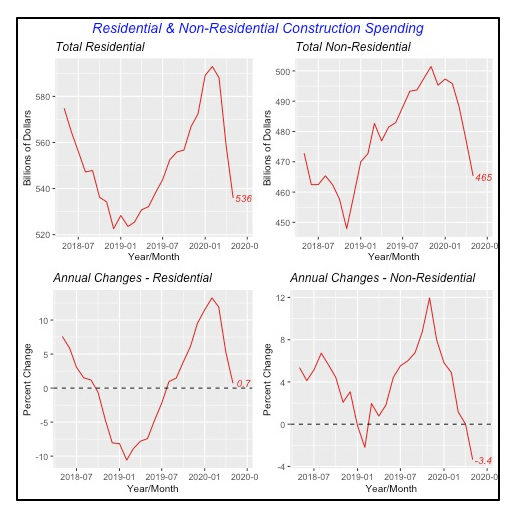 Within the Residential Construction market segment, the major force driving the overall decline is new single-familyconstruction, which fell 8.5% in May to $262 billion. In fact, as seen in the chart below, it has been in a freefall since February. 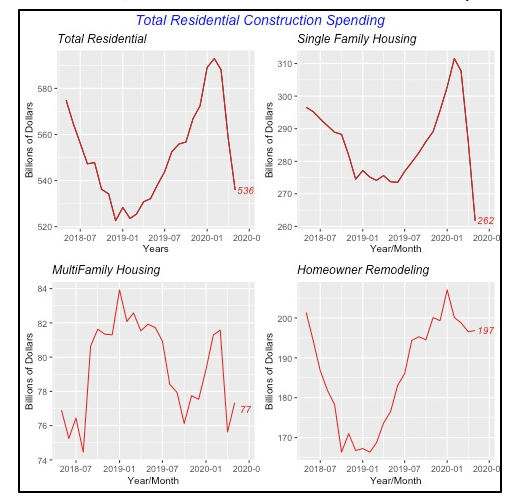 In contrast, multifamily construction rebounded by 2.3% in May to $77 billion, following a 7.3% decline the previous month. But multifamily represents only 14% of total residential construction.

The last component of Residential Construction market for which data is available, Homeowners Remodeling spending, remained virtually unchanged in May, rising by 0.1% to $197 billion. But this mild pause follows three consecutive months of declines in spending.

Nonetheless, homeowner remodeling expenditures still remain at fairly high levels, comparable to what it was two years ago.

Overall, this segment fell by 2.4% in May to $365 billion. This is the fourth consecutive monthly decline in spending. The vast majority of building types retrenched in May; actually, many of them have been in freefall for several months, even before the pandemic shutdown.

Notable exceptions were Drugstores, which increased 14% in May; Amusement buildings, which rose 1.1%, and Transportation buildings, which were 3.9% higher in May. But among these three building types, only Drugstores are above last year spending.

Despite 55,000 fewer people filing for unemployment benefits during the last week of June compared to the previous week, the number is still more than 1.4 million for the week. On a cumulative basis, 48.7 million people have filed for benefits since mid-March and, of these, 19.3 million are currently receiving benefits. The remainder are either being processed, had their benefits denied because they didn’t qualify, or the period during which they could receive benefits expired. 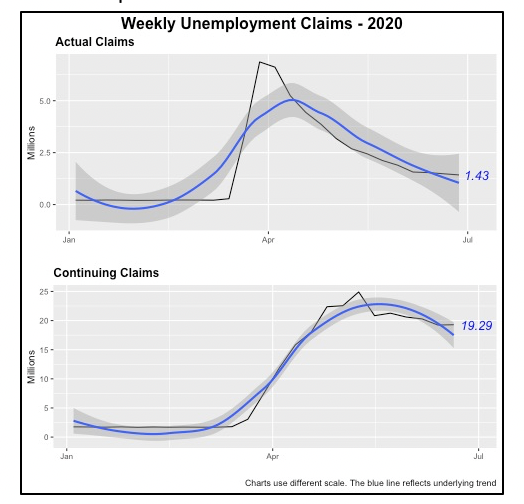 Despite the modest improvement last week, the number of persons who have lost their job and filed for unemployment benefits is astronomically high. The total Labor Force is currently 158 million individuals, of which the government officially counts 17.8 million as unemployed, arriving at an 11.1% unemployment rate. This figure is suspiciously low, given the state of the economy, the fact that more than 19 million are receiving benefits, and the various criteria that are needed to consider individuals officially unemployed.

The Federal Reserve Bank’s policy of keeping interest rates near zero has the effect of driving mortgage rates further down. Last week, the 30-year fixed mortgage rate fell by another six basis points to 3.07%. This is another historical low since the data began to be collected. 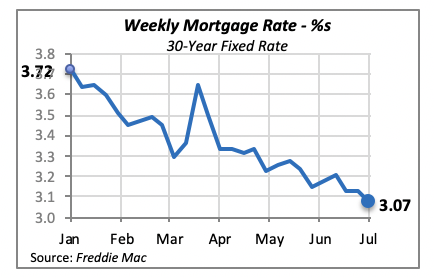 Despite lower rates, the number of mortgage applications for home purchases as well as refinancing has fallen over the last two weeks, according to the Mortgage Bankers’ Association survey. It is unclear whether the low inventory of homes for sale or the pandemic is keeping potential home buyers on the sidelines.